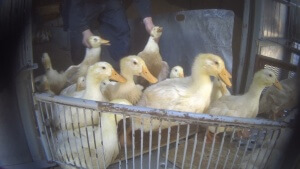 Ducks Kicked, Slammed Against Walls for Meat and Down

“Breeder” ducks were found dead with apparently prolapsed oviducts and/or intestines. Ducks, like this one, had swollen legs and feet, which workers said was caused by infections. This duck survived for at least two minutes after a worker wrung her neck.  These ducks survived for at least 10 minutes after being slammed against a wall. … Continue reading Ducks Kicked, Slammed Against Walls for Meat and Down

Copy and paste this URL into your WordPress site to embed

Copy and paste this code into your site to embed